Adoption and Boob Jobs (wait... WHAT?)

Did you ever say something, and then later wish you had thought about your word choices before they left your lips? Or on the flip side, have you ever inwardly cringed while listening to a well-meaning friend ask you a question that was simply not appropriate?  Unfortunately, at one point or another, moments like this happen to all of us.


Now answer this:
Have you ever met anyone who was intimately involved in an adoption? Perhaps they themselves were adopted, or maybe they grew their family through adoption, or possibly they made an adoption plan for their biological child. 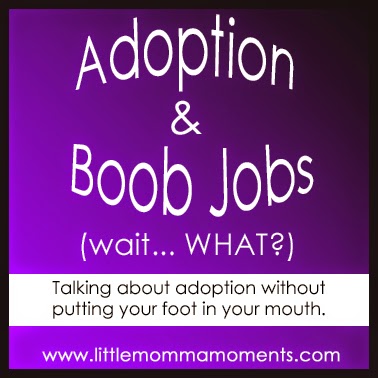 Today I am responding to information regarding the type of language we can/should use in these interactions with people whom are a part of the adoption triad: birthparent, child, and adoptive parent. The goal here is to give you some boundaries so that you don’t feel like you are walking on eggshells.


Let’s begin with the idea of Positive Adoption Language, or PAL. The folks at Adoptive Families remind us that “words not only convey facts, they also evoke feelings.” This truth is a large motivation behind the creation of this very popular list. PAL is well documented online as well as in published books. In the book Adoption for Dummies by Tracy Barr and Katrina Carlisle, BSW, LSW, Positive Adoption Language is literally addressed on the second page of the book, even before the title page! They explain that “part of the stigma associated with adoption comes from the language that people have traditionally used when speaking about it.” Not only is PAL the terminology most adoption professionals will use (pg. 12), but it is the terminology you and I can use, and will thus help eliminate that negative stigma. 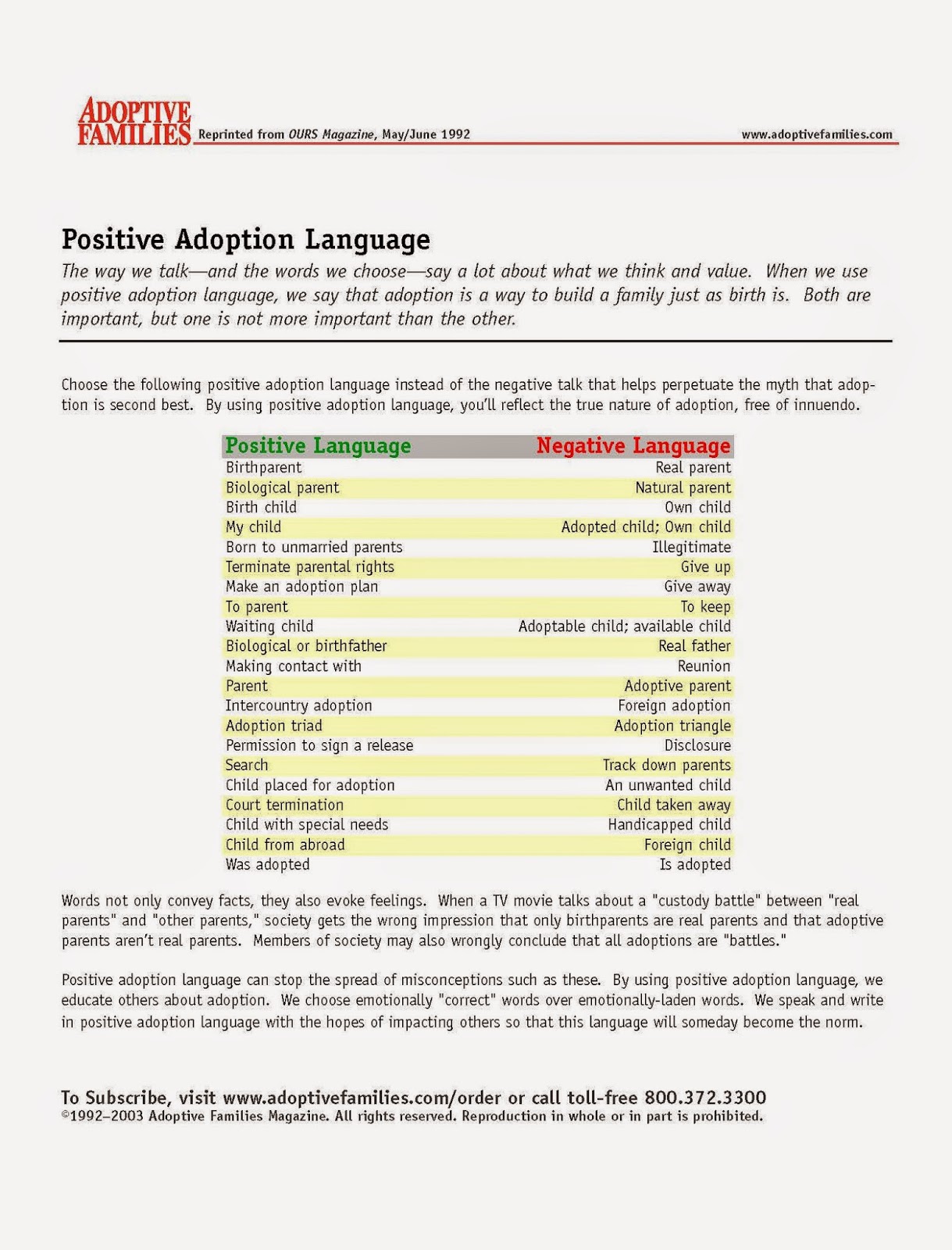 Now in an attempt to be comprehensive on this topic, I want to address an article from Adoption.net that was published on August 17, 2014 titled “PAL Isn’t Law.” (At the time this post is being published at Little Momma Moments, the link to the article is unfortunately unavailable due to technical difficulties related to the sites remodeling. However, I would like to address the sentiment of the article as I found it particularly interesting and relevant.) Basically, the author explained how she had met a birth mom whose adoption story was very traumatic for her. The woman identified with a phrase on the “Negative Language” list. For example, a birth mom may identify with the traumatic emotions implied in the phrase my “child was taken away.” While this  is presented by the PAL chart as a phrase we should not use, the author pointed out that it was the most sympathetic phrase to use with this particular woman.


So what are we to do?
Well here’s the deal, Positive Adoption Language is certainly the best place to start. If you are outside of the adoption triad, I believe you should “always” use the PAL terms and phrases, UNLESS the individual you are speaking with gives you permission to use alternative language. Empathy is incredibly important. While adoption is a beautiful way to grow a family, it is riddled with emotions, as is any growing family. It is important to truly HEAR what the individual is feeling. If the individual uses a negative term or phrase, consider asking them what term they would like you to use. Sometimes people will use the negative terms to express their pain, but would be offended to hear you use them. Try to take into consideration their body language and facial expressions. In the end of the day it is wise to error on the side of the Positive Adoption Language, and proceed with empathy.


Additionally we can learn a thing or two from Jesse Butterworth. In his YouTube video he created a “Public Service Announcement from Adoptive Families Everywhere.” He presents a unique and lighthearted guideline that can help make sure you are on the right path. He states that “sometimes very well meaning people will say some pretty insensitive things to adoptive families. We can only assume that they're not trying to be mean, but instead lack the language to say what they're really asking. So that's why we came up with this rule of thumb: 'If you wouldn't say it about a boob job, don't say it about an adoptive family.'"

With all silliness aside, I hope you found some clarity today on appropriate words to use with your friends that are involved in an adoption. As National Adoption Month winds down, please remember to pray for and support all those in the adoption triad.

Looking For A Specific Moment?

The Record of Past Moments